Week seven, what is up. I was so ready for a new week by the end of week 6. I had goals of taking some time to do things that I love and trying to be a little less hard on myself. One thing that has been extremely important in this journey, has been learning to rest without guilt. Which I have mentioned (about a thousand times) how bad I am at that. So that’s what I had planned to do this week. No outings, no overdoing it, more of a planning period to set myself up for success in the month of February so that I can return in March better than ever.

Sprinkled in with that rest, my mom and I had started to get in a regular habit of hitting the gym a few times a week. Since there is a spin bike there, I’m able to work towards that ever illusive full rotation that I just could NOT seem to get at this point. My PT said a lot of it is due to muscle guarding. Which means, the fact that I have a stopping point at all is more or less a subconscious and mental response in an effort to try to protect my right leg. Regardless, I ruthlessly continued to try for that full rotation without much success. I was making microscopic improvements each time, but definitely no where near hopping in a spin class.

At the end of the week they suggested that the next time I hit the gym to work on that rotation, to hike my hip up and kind up cheat that rotation around to get that motion back in my body. It absolutely kills me to have poor bike form since I’ve worked at few spin studios and taken my fair share are classes, but it was worth a shot. More on this next week though. 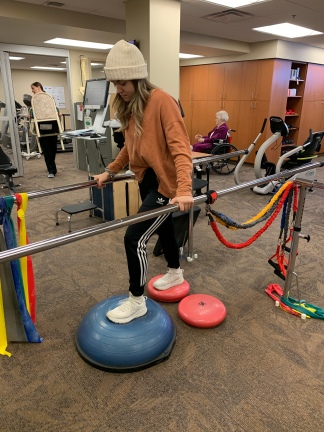 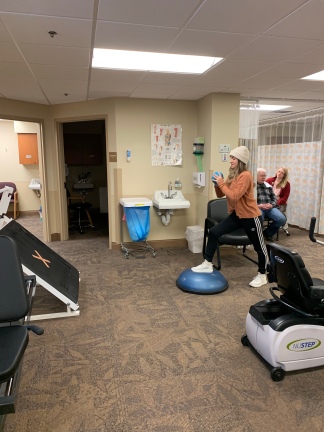 I did, however, level up in PT again this week !!! I Always love adding new exercises because it allows me to expand my “new normal” exercise vocabulary. And what I mean by that is, I learn more exercises that I can do on my own in the gym at the state I’m in. The first time back to the wellness center here was so overwhelming. I had steered away from doing much that involved my legs but during the 7th week post op, they added things in like assisted lunges, rebound ball and RDLs. At this point the exercises have finally progressed to begin to add in some lifts I used to do before I was injured. Granted, they aren’t nearly as easily executed, but it helps me keep the goal close in sight rather than feeling like I am just so far away from returning to my normal state. My quad is fairly awake, but due to the trauma and inactivity, it was going to take a LOT of work to get it up to speed.

Everything had been going smoothly until I slipped in PT Friday morning. Anyone who knows me well, is probably surprised that this is the first time I’ve slipped or fallen. For a dancer, I tend to be pretty clumsy. This little incident was no exception. I was standing on this small teeter-tottery platform that is made to help you stretch your calves out when it happened. I think I bent one of my legs to get a deeper stretch in my opposite calf and my  surgical leg slipped out from underneath me, forcing me to put the brunt of my weight on it and causing it to bend past that comfortability barrier. I was freaked out at first. I no doubt exclaimed in pain bit, but after we checked it out everything seemed fine. I could even bend it a little further than before I slipped. Yes, it was scary and I was 100% sure I had undone everything the surgery was supposed to fix, but rather than being a little sore the next day, nothing negative came from it. Maybe I was a little stronger than I thought. 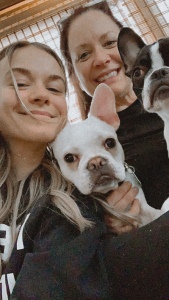 I was starting to get a bit stronger mentally too. I think I have done a pretty decent job managing the sads and squashing the what if’s during this time, but that doesn’t mean they don’t keep trying to come around. I was still recovering from the tough realizations I had faced the week prior but was looking forward to a weekend full of friends and football. To kick off the weekend we got to watch Banksy’s brother, Ringo, who is a mostly white and slightly bigger version of Banksy. I am not exaggerating when I say that my dog has been my saving grace in all of this.

I seriously don’t know where I would be mentally if it wasn’t for her being around to sit on my lap each day. She wasn’t really in the plans initially, but it couldn’t have worked out more perfectly. Just before my trip back to Iowa, my parents told me that our family friends had found a litter of 5 Frenchies needing new homes due to the previous owner’s divorce. I had been obsessing over the idea of getting a dog, a Frenchie specifically, for quite some time. When I had a full time job, I would spend down periods dog shopping and sending photo after photo after photo to my parents. I am surprised they didn’t block my number. So when they called me about this little poochie, I obviously jumped right on it.

There was lots of back and forth between my parents, the owner and myself to try to figure out the logistics of it all. The dog was in Iowa, I was in LA and didn’t have plans to go home immediately. Does it make sense for me to get a dog financially? How would we pick her up? Would I have to wait to meet her until I was home for state at the beginning of December? Can I even keep a dog alive?

What ended up happening is my parents went to go meet her, fell in love with her and I got to meet her only 10 days later with the way everything shook out with our travels back to Iowa for surgery. The rest was pretty much history. I was horrified she was going to be some sort of demon dog (if those even exist) or absolutely hate me. While it took her a little while to warm up to me since she had spent a full 10 days with pretty much just my mom, we are quite the perfect match.

I’ve read so many studies on the impact of animals on recovery of any kind and I can say first hand that they are all true. I cannot imagine spending these long and lonely. days at my parents’ house without her.  Not to mention, having another (practically human) life to focus on outside of my own, has been equally rewarding and beneficial to me. The unconditional love that my little wrinkly-faced, four legged daughter brings me each day is unmet and indescribable…even if I almost tripped over her a few times while I was still on crutches. I am slightly obsessed and that scares me for when I have a two legged child. 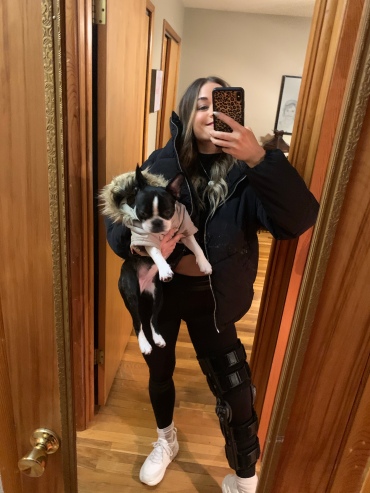 Ringo and Banksy had a sleepover and their owners joined us the next day for Super Bowl Sunday! While I wasn’t bottomless mimosaing with my girlfriends at the Den on Sunset this year, my mom and I planned a full on SPREAD free of anything even remotely healthy. I made buffalo chicken dip and my mom made beer battered brisket sandwiches in the oven and holy god damn it was so so good. We also had a desert spread which I will not even mention out of sheer guilt but believe me when I say no one went to bed hungry that evening. A successful day of eating our feelings just a smidge. 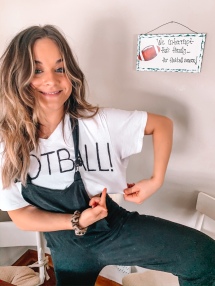 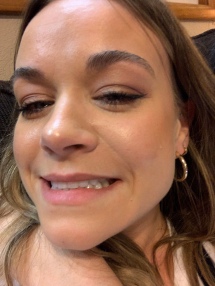 And yes, the second picture was taken after crying like a baby after the google “Loretta” commercial.

I spent most of my week inside my head trying to reroute and plan for success in February. While the thought of being delayed another month was a bit daunting, it was *another* fresh start for a new level of motivation and progression. My days were numbered back home and I had a LOT of work to do if I wanted to return at the beginning of March. I felt like, and still do, I have restarted in this recovery process so many different times. But I felt ready this time, I wanted to feel good when it comes time to finally get to return to Los Angeles. I didn’t want to feel like this months have set me back but rather pushed me forward, in more ways than just physical. That means that it was go time. I decided to keep my mindset on auditioning for pro-teams, even if I know it may be a little bit far fetched. That way I can treat this month as a training and preparation month with a tangible goal to work towards.

February, let’s get it.