If you would have asked me on New Years Eve 2009 to predict how I would end this decade, I probably wouldn’t have said in my finest pair of pajamas and bulky knee brace on a couch with my parents in Hampton, IA. But hey, here we are.

On December 17, I had a very long anticipated surgery done on my right knee. After nearly a decade of dislocations and pain that increased with each passing year, I had my medial patellofemoral ligament (MPFL) reconstructed using a cadaver ligament and micro-fractures done on the back side my knee cap to generate cartilage growth. If you’re thinking “what the hell does that mean,” here is the Reader’s Digest version. One of the ligaments that keeps my knee tracking properly was stretched out like an overused hair-tie due to chronic dislocations. To fix this, they went in and took out that useless thing and strung a dead person’s Gracilis from the inside of my leg through my knee cap and back to the inside in a hope to keep that knee cap tracking straight and not out to the side. Once they got in there, they were disappointed to find that I have virtually no cartilage left on the backside of my patella. Enter the micro-fractures. Hopefully, these will trigger my body to generate more cartilage on its own.

Ok, so I’m sure at this point you are very impressed with the amount of knowledge I have about this. I am too as I proofread this but I’ll admit, I wasn’t super well-informed about what the recovery looked like for this surgery. This shouldn’t come as a shock to anyone, but I am most often the type that over analyze and over research things. So the fact that I did little to no extra digging around prior to D-day is very uncharacteristic.

All of my research came while I was stuck on the couch, loaded on pain meds and feeling helpless. Sounds like a great time to circle the drain!!!! I scoured the internet for blogs or articles about other patient’s personal stories with recovery, but failed to find anything that gave me all of the answers that I wanted. In fact, most of what I found were horrible scar photos and people celebrating finally bending their knee after 3 months…..and that was not the kind of progress I was ok with having.

SO. I am not only writing this as another attempt at a new years resolution to write more consistently and as a little bit of therapy for myself, but also for people who may be in the same position that I was before I harassed the PA at my follow up appointment for answers. Which, by the way, some of those answers I think I may have been better off not knowing. He told me they literally had a metal rod in one side of my leg, through my knee cap and out the other side so that they could get to the bottom of my knee cap. Nice!

Alright, here we go. I am extremely happy to have a clear mind and finally feel myself enough to write again. I’m going to kind of chunk it up in different aspects of the recovery process because (no surprise here) I have a lot to say. Welcome to part one of my recovery story.

My surgery was scheduled for December 10. I had just driven back from California with my dad mid-November and jumped right into a busy schedule back home. I had several choreography and teaching jobs lined up and worked the social media side of the ISDTA dance competition. During any downtime, it felt like I had an appointment of some kind. Dentist, doctor, gyno, orthopedic surgeon and the list goes on and on. My family lives in The Middle of Nowhere, IA, so trust me when I say I put some MILES on my car getting from point A to point B and back again. Before I knew it it was the day before surgery…and I was run down in all caps and also italicized. Also maybe underlined.

At first I wasn’t too mad at that. I knew I was about to have several weeks of downtime and sometimes it’s better for me to stay busy so that I don’t overthink the details. But once I started feeling nauseas and buried myself under about 4 blankets, I knew I was more than just run down. Yes, you guessed it. I was blessed with the flu the night before my original surgery date! I am not kidding when I tell you I haven’t been sick since like my sophomore year of college. WHY NOW.

The flu came on hard and fast (hehe) with a dead sprint to the bathroom and a very glamorous projectile vomit as I tried my darnedest to hit the porcelain god. So close. So, so close.

I’ll spare you the rest of the gory details. But after spending a night half asleep on the bathroom floor, we got ahold of the surgery center and rescheduled. The new D-day was December 17, a week from the original date.

This was good for me. It gave me a week to decompress from my previous schedule, load up on nutrients and really soak up my last few days of being able to move freely. From the other side, that last part is something I am so grateful I was able to do.

Alright. Let’s try this again. Round 2. I had to get this stuff called hibiclens to wash my leg with the night before to disinfect. So I got that done (during what I didn’t know would be my last normal shower for a while…RIP) and headed to bed feeling rested and ready for my knee to get annihilated. Yeehaw!

HELLO NERVES!!!! I’m going to be honest, my memory of the morning before surgery is pretty hazy. I woke up at about 5:45, got dressed, said goodbye to my dog and got down the road on the way to Iowa Ortho in Des Moines with pretty much no idea what to expect and nothing to calm me down. And also a very empty and dry stomach. You aren’t allowed to eat or drink anything from midnight before your surgery date until after the procedure. My throat was dry as the Sahara and I couldn’t load up on coffee like I normally would with a 5:45 am wake up call. HInd-sight, that’s probably a good thing because my anxiety was through the roof without any caffeine. 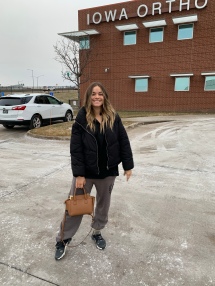 After I got there, I filled out some paper work and then they took me back to put on a fancy shmancy hospital gown and pee in a cup to make sure I’m not pregnant. Which I can assure you, I am not. On another comical note and notice to my future surgery-havers, wear full butt underwear if you are going to be putting on a hospital gown…they are pretty open in the back and unless you wanna give the staff a show it is in your best interest. I did not do this. Tickets were free to the booty show on December 17, 2019. 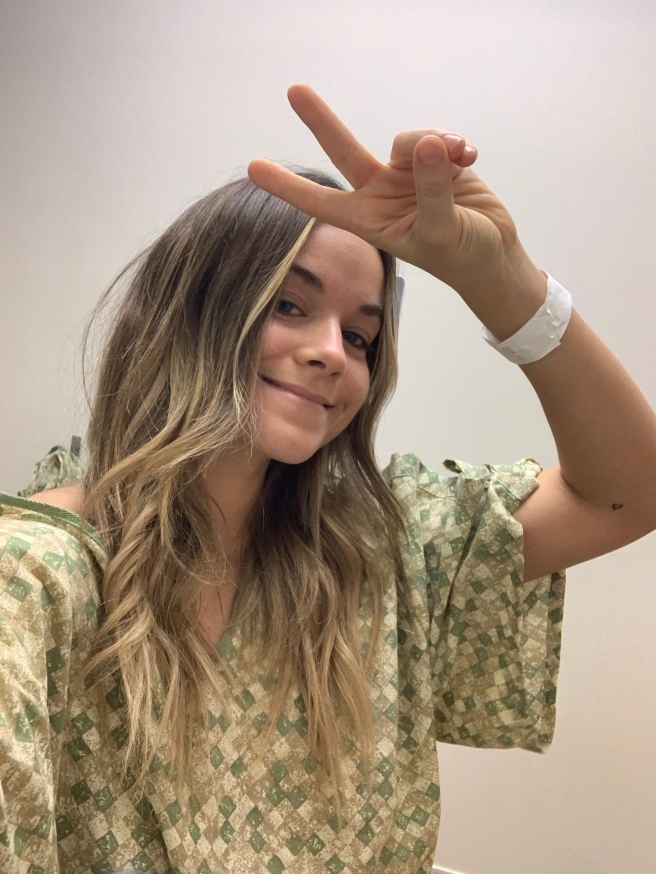 Then they put me in a reclining hospital chair and covered me up with a weird heated blanket. Once I was all settled, they let my parents come back. In this small area closed off by a curtain, the anesthesiologist came back and talked to me about what was about to happen. I had never been put under so I had a lot of questions. Most of them centered around “what the heck are you about to put in me?” The answer was propofol, lidocaine and fentanyl with another antibiotic for my penicillin allergy, just in case. During my time in the prep area, I met several extremely kind people that would be in the operating room with me. I was too nervous to think of any questions to ask, but felt comfortable and as ready as I could. 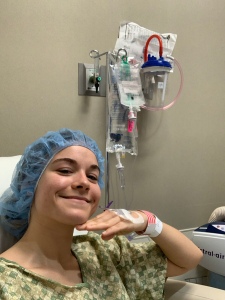 Shortly after that, they wheeled me back to the OR and stuff started happening right away. All of the people that I had met during my short time in the prep area were resurfacing and beginning to get me set up on the table. It felt like a million people saying hello at different times and stating what they were going to be doing to me- “l’m going to help you on the table,” “I’m going to put in this IV,” “lift up your gown so I can attach heart rate monitors to you,”, “do you want to move your pony tail so you aren’t laying on your scrunchie?” You get the gist.

And then I woke up.

No, I did not skip anything. I didn’t even see Dr. Vinyard come into the OR and no one counted me down to “sleep” like I expected. I’m not even sure I knew they had started the drip before I was out cold. I learned later that my body reacted pretty significantly to the fentanyl. My blood pressure dropped more quickly and lower than anticipated, so they had to give me something to reverse the effects a bit. That probably has something to do with the fact that low blood pressure is already a norm for me.

Anyway, all went well and I woke up groaning on a hospital bed super dizzy with a straw in my mouth. WATER. Finally. They gave me a few more pills in some applesauce and my mom said they probably fed me toast too but I don’t remember at all. The only thing I remember is being incredible dizzy and disoriented. Like I had been asleep in a dark cave that had been spinning in circles for like 2320 years and I had just woken up for the first time. What day is it and what century am I in?? To help with the nausea for the car ride home, they put some sort of patch behind my left ear and once I started to feel a little bit better, they moved me to a different room where my parents and our family friend could come see me looking like a wet noodle.

Next up they fit me for crutches and I insisted that I was fine and could do the adjusting on my own if I needed. This is classic me not wanting to admit that I am in fact not doing fine and have no idea how to set up crutches. My parents thought that was pretty funny cause I’ve been queen of “I’m fine!!!” since I was old enough to talk.

They put me in a wheelchair eventually and I asked for some more water. I also spotted some saltine crackers which I requested and then suffered through trying to eat them as the cracker stuck

to the inside of my mouth because it was so dry. I think I cracked a joke about the food here being gourmet! And that’s about the extent of my memory. That and I requested a green juice as soon as possible because I felt like I “needed some greens in my system” l o l. Green juice in one hand and puke bag in another, we were on our way back to Hampton and I was on my way to sleep. Right on!

It ain’t over, folks. Check out week 1 here.