Christmas was quickly approaching and I had BIG dreams of leaving the four walls of house. I felt like I was going literally insane. We made plans to have our family Christmas in the morning and then *fingers crossed* go see family and friends in the afternoon. As I woke up and crutched myself down the hallway to check out what Santa had brought, I had one request. BARF BAG PLZ. I hadn’t been nauseous since my surgery day but damn was I feeling like I slept on a rollercoaster all night.

Since I had run out of my Percocet prescription, they gave me a new one for Tramadol. I took one in the middle of the night on Christmas Eve and I’m pretty sure that was to blame for the wave of nausea. Thankfully it passed and there was no pukestravaganza round two. CHRISTMAS WAS SAVED!!! We set up a stool for me to rest my leg on while I opened my presents. Things felt *almost* normal. Next step: gtfo of Hampton. 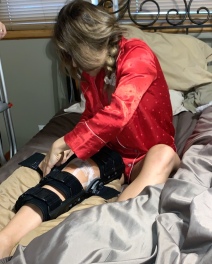 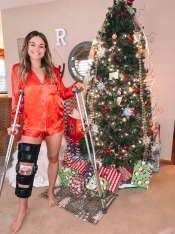 Prior to surgery, I hadn’t even thought about how difficult it would be to get in and out of a car or that fact that I wouldn’t be able to drive. That was the big hang up with traveling any where besides 2 minutes down the road to physical therapy. My parents live in the middle of no where so to get anywhere we need to go, it takes at least an hour and a half. We headed towards Pella (where I grew up) to see family and friends with the instruction from the doctor to stop about half way and get out to crush around as a precaution against blood clots. 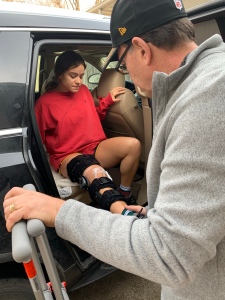 This wasn’t too big of a concern for me because I had already gotten blood work done to test me for a genetic predisposition to blot clotting and I was in the clear.

I decided to fast on pain meds so that I could enjoy a glass of wine at our family friends’ house. Getting REALLY crazy over here. Once the long awaited moment had come, it took me over an hour to get through one glass and after two I couldn’t words. I felt like my brain was mush and when we tried to play What do you Meme, I struggled to read the cards without stuttering or fumbling over my words in some way. Maybe I was tired or maybe I really was ~tipsy~ after 2 glasses of wine. Whatever it was, wasn’t really worth it. If there’s anything worse than being on crutches, it’s being drunk on crutches and I was NOT about to go there. Cut off: party of one!

And for my next trick I will attempt to go up the stairs!!!! This was a three person job and unless I wanted to sleep on the couch (again) it was unavoidable. The bedrooms at our friends’ house are all up stairs. Basically I just sat down backwards and walked up the stairs with my arms while my dad held my legs and our friend Laura followed behind us with my overnight bag. Shoutout to everyone who made this journey possible.

The next day I had the pleasure of navigating a grocery store. Trader Joe’s. God, I missed my California friend Joe, the Trader. I got a Vitamix for Christmas (God bless you Santa) so I had all sorts of things that I wanted to pick up there. Now that I was more comfortable standing, I planned to spend some time in the kitchen whipping up whatever I could to pass the time.

Hummus, almond butter, smoothies, juices- WHERE DO I START?! I also talk non-stop about TJ’s cauliflower gnocchi, so that was also a must on the list (especially since I also got an air fryer). Very eager to do something that reminded me of LA, I think I was a bit overzealous to start my first public outing because not only did it take way longer than necessary, I was totally exhausted by the end of it. It felt good to get out and about, but I was beyond ready to go home and lay down.

I stayed that way for a few days. Although the pain had subsided, PT started to get more challenging. I was down to taking medication pretty much only before therapy sessions and sometimes at night. My mobility really hadn’t changed too much, but I had beed cleared to roll over on my stomach for “tummy time” like a god damn baby.

I laughed at it at first but it quickly became one of my favorite parts of rehabilitation. I had developed a horribly tight and extremely sore hip flexor and sore as fack left butt cheek from picking up the slack that my right leg had checked in a the OR door. Laying on my stomach gave my hip flexor a second to stretch and chill out. Plus, I’m such a stomach sleeper and was starting to get pretty sick of being on my back 24/7. 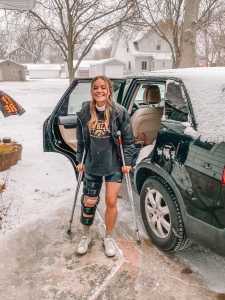 On December 30th, I had my follow up appointment at Iowa Ortho. It’s a weird thing, walking into an orthopedic center. Everyonethere has crutches or a brace or has some sort of apparatus they are using just to get around. It’s like a car repair shop but for humans and I was next on the tune up list.

I saw the PA this time and this is where I bombarded him with questions. Most of those, I’ve already detailed previously. I will spare you the details of bringing up the giant metal rod that was through my entire leg again. He cleared me to begin to ween myself off of my crutches starting with one and going to none. This was GREAT news. He said the more I force myself to hobble around on it with my brace locked, the more it will stimulate my quad muscles to WAKE THE F UP.

This is where I learned more about my cartilage deterioration. He said that had they known it was as bad as it is prior to surgery (it’s stage 4), they would have discussed other cartilage regeneration options prior to surgery. They could have taken my cells and sent them off to a lab to regenerate and then place them back behind my knee cap, but this process often isn’t covered by insurance and when it is, it takes a long time. I found out that day that the micro-fractures were unplanned and likely the source of a lot of the extra pain that I am having. I am hopeful this method works, but I would be lying if I said I didn’t have a fear that the cartilage loss will cause the same pain and discomfort I

was having prior to surgery. But, during the recovery process, you absolutely cannot let yourself get caught up in the what ifs.

We ended this outing at Target. I was having moments of feeling sorry for myself as friends talked about they NYE plans back home in LA so my mom and I decided some cute pajamas and a nice bottle of champagne would help at least a little bit. I am not one to get caught up in Holidays (unless it’s my birthday that’s a different story) so I was kind of upset with myself that I was feeling low as NYE approached. I think it was just a culmination of all of the post surgery feelings. Like I’ve said a thousand times, it has not been easy. I miss dancing, I miss going on walks, I miss being able to drive anywhere and crank up the music and I miss holding my four-legged child in her dog bag OK?!?! I miss walking to the kitchen to grab a snack and being able to carry it back by myself. I miss showering without my mom having to sit in the bathroom to help me out. I miss my life back in California. I miss a lot ofthings. And I think I just got hit with a wave of it on New Years Eve. It is extremely difficult to go from feely moving and being active 7 days a week to nothing at all. It will get better, and that is what keeps my spirits high. But sometimes, the now is gnarly.

What has been cool to see, is a huge shift in what makes me happy. Before my surgery, I took a lot of what my body was capable of for granted. I would mindlessly walk into a spin class or HIIT workout and not even think about how cool it is that my body is able to do what I could do. Often times, I would even leave disappointed because I didn’t burn a certain amount of calories or beat my score from last time. On the morning of New Years Eve, I was asked to warm up on the “bike” at physical therapy. I kind of laughed at Kristin, my PT. I’m like dude, listen. I can’t even get off the couch by myself and you want me to ride this thing? She helped me onto it by lifting up my “dead leg” (as I like to call it) and explained that it’s called a Nustep and isn’t quite what I had been riding on during a spin class. It’s closer to a stair stepper machine, only sitting. Regardless, it was a step in the right direction that would challenge my leg to start bending more. I was served a slice of humble pie as the silver hairs to my left and right were taking laps around me on their machine while I had a whopping ZERO STEPS PER MINUTE. Rather than this being discouraging to me, I could not wipe the smile off of my face. This small amount of movement that I could manage, gave me a glimpse of hope for the weeks to come.

I am thankful for the support of my family and friends and my physical therapy team. I’m thankful that I have this as an outlet to share my experience, if for no one else’s benefit, for my own. It feels good to be candid about the ups and downs of this journey. I’ve been told that it gets a lot easier after about the 3rd week and writing this from a future perspective, I can say that is true.

There was an error retrieving images from Instagram. An attempt will be remade in a few minutes.