I am a perfectionist.

I remember being about 8 years old and auditioning for a role in our community theater’s production of Sleeping Beauty. Typically the younger kids get cast as a something minor whose only purpose is the be cute and make the parents say “awwww”. Nope, not me. Not my jam. I went into the audition wearing something I thought Princess Aurora herself would wear. I wanted a part in the musical but not as some lame side character. I wanted to be the freaking princess. The lead role. Which is almost ALWAYS someone over the age of 15. Did I care? No. If I was going to audition, I was going to land the biggest part in the entire production. Anything less was failure.

Fast forward 3 hours to me having an absolute hysteric meltdown in my room. Like HYSTERIC.

My mom came in with a cold wash cloth to put over my eyes to try to help calm me down but literally nothing would work. Of course, my parents had a big discussion with me to try to explain the directors purpose for casting who he did and that I’ll get the next one. But I didn’t want the next one and I didn’t understand why I wasn’t selected.

Ever since I can remember I have obsessed over things being perfect or being the best at whatever I do (which, hello, that is the best way to set yourself up for failure).

Keeping this in mind, fast forward 14 years and I’m pursuing a career in dance and entertainment. In LA. The Mecca of perfectionism. And as much as I wish I could say I’ve completely shaken that 8-year-old version of myself, I can’t. She is still very much a part of me and, in some ways, she’s 100 times louder. What I can say, is that I’ve learned (and am constantly learning) how to deal with her.

I really believe that mindset is everything and that there is a way to put a positive spin on most things we face in life. Learning how to see the strength at the other end of your weakness is a hard thing to do, but allows for self growth rather than a fun little spiral of self deprecation. And we all know I love self-deprecating humor. For me, I think being a perfectionist has a lot of positive qualities. I am meticulous about my work. I walk in to any new task or opportunity ready to give 110%. My drive to be the best is so loud it almost overwhelms me. Which brings me to the flip side. I get in my head when I’m out of my comfort zone. I spiral about all of the other things I’m ‘inadequate’ at when one thing goes wrong. I have a hard time taking no for an answer. I have an intense fear of looking stupid and I hold myself back from opportunities if I don’t think I know what I’m doing….even if it’s just mentally. But here’s the cool thing- I’m aware of all this.

When I walk into an audition, I never know how I’m going to feel. There are days when I enter the room with my head held high, loving what I’m wearing, the way I look and the way I’m dancing. Those are the days that I walk out of the audition feeling amazing whether I was cut first round or stayed until the end. But there are also times when I defeat myself before I even take off my jacket to warm up. When I’m comparing myself to every other girl in there. Everyone picking up the choreography faster than me, everyone who knows the casting director already, everyone who has better hair or a better outfit…a better body…it’s hard not to. In an industry of constantly being told no with no with zero feedback or reason given, you find yourself always searching for the why behind the no. Why did it turn out this way? Oh it’s gotta be because my hair wasn’t long enough. I should have hit the gym more. I’m not hip hop enough. I wish I was taller. Tanner. Skinner. Prettier. Better. Spiral spiral spiral spiral.

It’s a lot. But like I said, I am aware of it. I’m able to see past the now and look ahead to

the future…to know that that particular ‘no’ is a ‘yes’ somewhere else. And that, my friends, is key. I always like to refer to this as the iceberg effect (partially because I love Titanic and am always looking for ways to reference it in my day-to-day life).
Let me explain. When you look at an iceberg (or at least a photo of one cause I don’t know how many people are hopping on ships to go iceberg hunting), you see a little triangle of ice sticking up above the water. Think of that as the now. The parking ticket you got 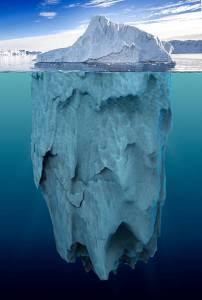 yesterday, the guy who is just not that into you, the gig you got turned down for, the deal you didn’t close…But what you can’t see is all the stuff that’s coming your way or the why behind it. The stuff that’s not right in front of your face but is underneath all of the day to day stress, working it’s way into your life as it’s meant to be. The good stuff. I really do believe that coincidence isn’t real and that everything happens for a reason (how many times have you heard that?). But it’s true.

Persistence is everything and perfectionism can be a major deterrent in keeping a positive mindset, especially in the entertainment industry that focuses so much on the outward appearance, but use it to your advantage. Flip your mindset and learn how to find the strength within your so-called weakness. I promise your fate with the iceberg will be a hell of a lot better than Jack’s.