When I decided to audition for the Clippers, I literally scoured the internet for some kind of guide so I could have an idea of what to expect. Although I found a lot of info on the spirit website, I wanted to find some sort of blog that detailed the audition experience (or entire experience for that matter). Since I didn’t find what I was looking for, I decided to create my own now that I’m on the team (what in the world?!). 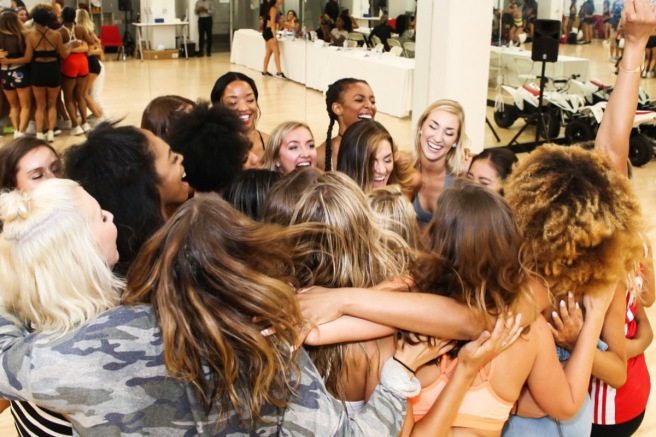 Auditions can be terrifying. How do you prepare? What do I wear? How many are they taking? Who will be there? Alright. So I can’t answer all of these things, but I definitely can tell you about my experience.

Let me start off by saying that Clippers Spirit is a lot different than most NBA or even NFL dance teams. You don’t audition in briefs, tights and a sparkly sports bra. There’s no bikini round, sports trivia or extensive interview. This is what attracted me to audition in the first place. This squad is different and breaking the mold of what it means to be an NBA dancer. We live in LA, the mecca of the dance industry and this team strives to embody that in everything they do. Score.

About a month before the audition, Kelly and I paid $40 for the try-out prep clinic. If you’re considering auditioning for anything dance related, whether it be a sports team, company or even tour, it’s smart to get yourself in front of the coach/choreographer. This is helpful not only to hopefully make a good impression on the person in charge of choosing the cast, but also to make sure it’s a good fit for you.

We started with a warm up, then proceeded to learn an across the floor combination to showcase technique and style. After that we all went across the floor and received individual feedback from both the coach and current captain before going around again. Once that was through, we learned choreography from once of last season’s routines and also did that in smaller groups of 5. Basically what the clinic ended up being was a mock audition. They told us at the end of the day that we should continue to practice both the across the floor and the combination we learned. And thank God we did. 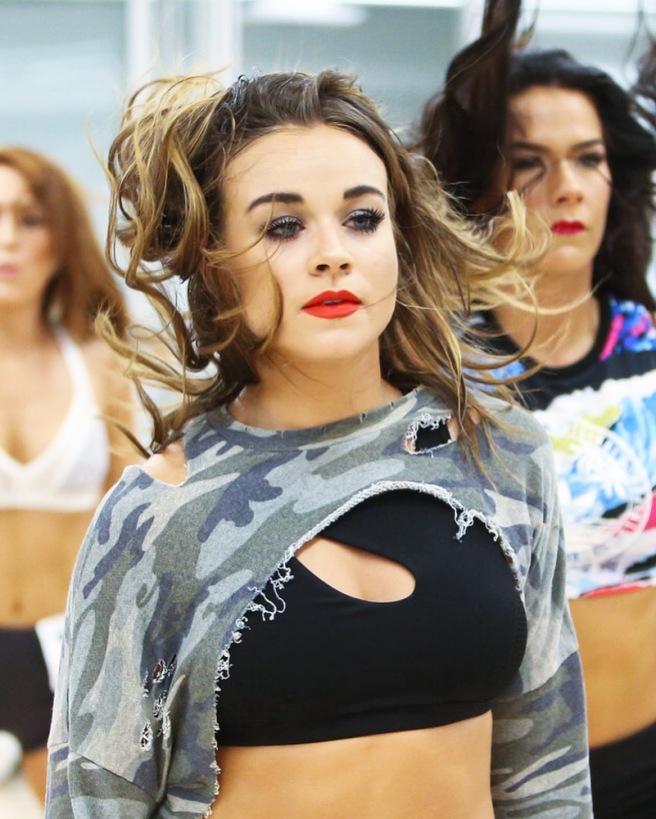 Okay. So now it’s a few weeks later and the audition date has finally rolled around. We had spent the last few weeks holding each other accountable with work outs, healthy eating and moral support when we went to the mall to find an audition outfit. Honestly that was the worst part. I am the most indecisive shopper in the entire universe. But I ended up going with a fancy sports bra from Lorna Jane (this one) and some good old fashion booty shorts. We left plenty early to make sure we weren’t at the end of the sign in line since we had a feeling there were going to be a ton of dancers there. We were more than right. In fact, there were about 350 girls vying for a spot on the team. Gulp.

Low and behold, the first day of auditions were exactly like the prep clinic. To a tee. Best $40 I’ve spent in a long time. We learned the across the floor combo (that Kelly and I already knew) and went across the floor in groups of three. Each line danced for either one of the two former captains or the coach, Latrice. Once you reach one of them at the end of the combination, they either tell you “thank you, please stay” or “thank you” (which is dancer code for “you just got cut”).  Even though I already knew the combination and was confident in it, it’s impossible not to get nervous. There have been so many auditions I’ve been to where I am fully confident and get cut anyway. Why would this one be different?? That’s when ya gotta tell yourself to chill tf out. Relax and trust your training. For me, this means weaseling my way closer to the front to get it out of the way. It can be easy to keep waiting to dance in later groups, but personally I think that just leaves more time to get in your head. Be brave and go towards the beginning.

After they made cuts (sigh of relief), the remaining dancers (I think there was about 125ish left at this point) learned a combination from last season. You guessed it, we already knew that one too. I was SO thankful that it was the same one from the clinic. This allowed me to focus solely on the details and performance aspect of it for this round of the audition. They counted us off into groups of 5 and Kelly, Kristyn and I were all sectioned off to dance in the same group. That part of the audition was a blast. We left the floor feeling confident. All that was left to do now was wait. THE WORST.

After what felt like an eternity, the judges came back from deliberating and asked a few of the hopefuls to dance again. Then the was time to find out which of us would be moving on to the final round the following day. At this point in my LA journey, I’ve gotten extremely used to not hearing my number called. But I had a different feeling about this one. I sat there with my eyes closed and fists clenched waiting to hear 296. Since my group was one of the last ones for choreo round, my number was one of the last ones to be called. BUT IT WAS CALLED NONETHELESS. Enter a wave a gratitude. Holy cow. Out of 350 some girls, my number was one of about 30 to be called for the final round. The finalists were photographed and given an interview time for the next day and sent on our way.

Alrighty, onto day two: FINALS. They recommend wearing the same thing or something similar as the first day of auditions. That way you’re easily identified. Makes sense. I knew that we were going to be learning some sort of hip-hop/jazz funk number so I threw on a cropped sweatshirt over my sports bra to feel a little less jazzy. I’ve learned that I am definitely a person who dances how they feel, so making sure I felt good in what I was wearing was crucial.

The interviews were about 5-10 minutes long and basically was just a quick “get to know you” session. It was nothing crazy or extensive. Just a short and sweet Q&A to let them know why you deserve to be apart of Clippers Spirit. I talked a lot about my experience on the Iowa Dance Team as well as my admiration of Clippers for breaking the mold of what it means to be a professional dance team. I think I also threw in the word ‘badass’ somewhere in there. I also dabbed at my friend, who was next in line, on the way out. Why do I do these things……????

Onto the dancing. They brought in Kevin Maher (HOW STINKIN COOL) to teach the choreo for the final piece of the audition. I’ve been dying to get in his class so I was pumped. I challenged myself to stand in the front during this portion of the audition. The judges stay in the room the entire time so (as cliche as this is) your audition starts the second you walk through the door. Your dance teachers growing up were right about that one!!!! Once we learned the combo, we were asked to dance in groups of three whenever we felt ready. They also were very adamant that we don’t practice while we were waiting to audition because it’s distracting and unfair to the dancers who go first. Makes sense.

By this point my nerves were on full blast. I ended up dancing about midway through all of the groups and left the floor wanting to dance again. I could have been so much cleaner if I would have relaxed and breathed through the nervous energy. But taking into account that I’m always way harder on myself than I need to be, I felt proud of what I did. I was done. The audition had come to an end and now it was out of our hands. 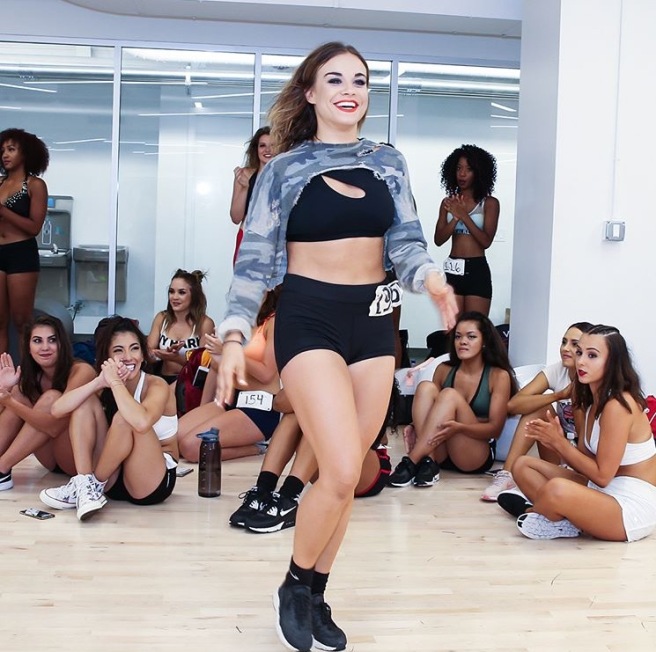 Waiting for my number to be called was the absolute most nerve racking moment of the entire audition. Which is weird when ya think about it, because at that point you can’t do anything about it. They announced the number of 8 veteran members and 12 rookies. I knew they were taking 20 total numbers, so as they got closer and closer to reaching 20 I started to prepare myself jusssst in case they didn’t say 296. I still had a great feeling, but I wanted to be ready for whatever was thrown at me. My number was the 19th number to be called. TALK ABOUT STRESS YOU GUYS. But damn, I did it. Finally. It felt like all of my hard work had paid off.

Now it’s official. We went through orientation at HQ, had our first rehearsal weekend and even received our uniforms. I absolutely can’t wait to continue with this new chapter of my life and can’t help but feel overwhelmingly grateful to have 19 talented and dedicated women alongside me in this journey.

One thought on “I AUDITIONED FOR THE CLIPPERS”