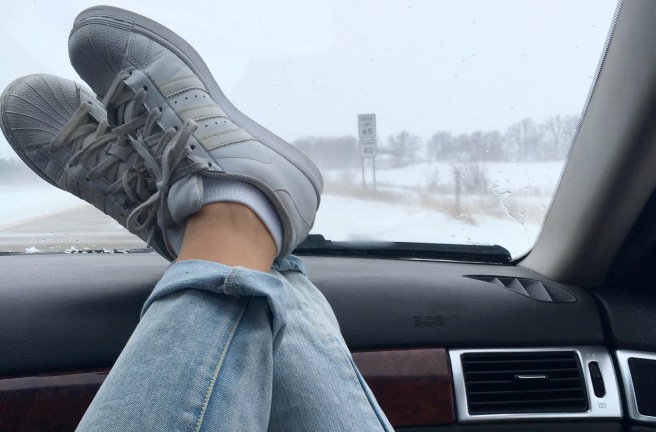 In the last 14 days I have been in 6 states: Colorado, Nevada, California, Nebraska, Minnesota and Iowa. Six hours on a plane 33 and a half hours in a car in the last two weeks. Now that I’m officially back to the homeland, I’m suffering from a very real case of PVSD (post vacation sads disorder). Symptoms include me sitting on my couch in the middle of nowhere, Iowa, looking out the window at snow instead of palm trees, scrolling through vacation pictures, and putting off anything that signifies I have any sort of responsibility coming my way (heaven forbid I do something productive on winter break). I’m stuck in a reel of replaying the adventures of the past few weeks over and over again. I think this is because I don’t want to be back in Hampton, Iowa, and I sure as hell don’t want to start my 18 credit semester on Tuesday.

Anyone who’s ventured outside of their home knows that this kind of travel entails plenty of window time. In case you’re unclear of what I mean, this is the part of the vacation where you sit, whether in a car or plane, and stare out the window and think about life or do what I do most often and pretend like I’m in some sort of dramatic music video (tell me you’ve never done that and I’ll tell you you’re full of shit).

During some of the time where I wasn’t in an old school Hillary Duff or Blink-182 video, I got to thinking about all of the people I had encountered over this past trip. Ok yes, I was blessed to actually physically meet some pretty amazing humans over this last vacation, but even beyond that. I’m talking like all of the people I had just passed on the street and missed (most likely due to one of two things 1. Me scrolling through Instagram or 2. Being too hungover to take off my sunglasses) or all of the people living lives I know absolutely nothing about in the homes I was flying over.

Have I lost ya yet? Let me try and put it in perspective. Think about how many people you don’t know that you pass in a given day. Maybe you make eye contact, maybe you don’t. But you’re walking, they’re walking, each of you have your own thing going on, but you know absolutely nothing about who they are are what’s going on in their life…and continuing to walk by is you being totally cool with that.

Obviously it’s not possible to meet all 7 billion humans on this earth, but for some reason it’s unsettling to me to think that any given stranger I encounter either on the street or in a coffee shop and doesn’t say hello is totally okay with never seeing me again. Selfish, maybe, but it goes both ways. Too many times I’ve seen someone and been like ‘hey they seem interesting’ or ‘hopefully i run into them again,’ leaving it entirely up to chance. Doesn’t matter what’s going on in my head though, cause on the outside at that point I’ve become just another passerby who is completely oblivious to the fact that this person has their own life and complexity outside of just being an extra in mine.

So here I am, staring out the window of the car trying to flip back to my music video brain, and thinking I’m completely bat shit crazy at this point, and my attention is redirected to this video. Watch it, or else I’ll tell everyone you do the weird music video thing too.

Good, right? There’s actually a word for it: Sonder. Some guy, somewhere out there cared enough to make a video about the word so strange people, like me, can feel slightly less strange. Sweet. Thanks, guy.